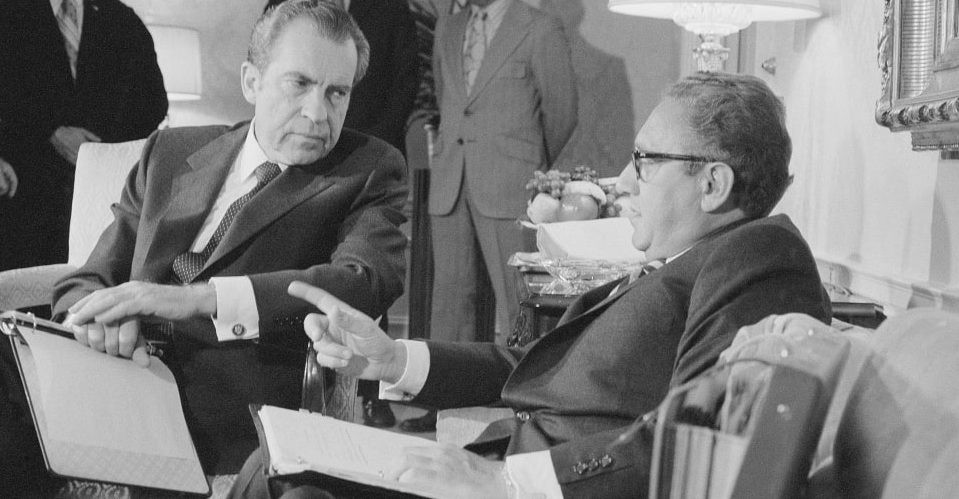 The political scientist and diplomat from Germany with Jewish roots is considered one of the most formative representatives of offensive realpolitik and pragmatism. As a heavyweight among diplomats who received the Nobel Peace Prize after the end of the Vietnam War, the diplomatic icon is equally loved and hated. As Machiavellist of the first blow, Kissinger understood like no other the role and necessity of power in international relations – the prioritization of state interests over values and ethics. In his personal career, he used various means to reach positions of power. Ideologically, Kissinger was strongly influenced by politicians and philosophers such as Metternich, Bismarck or Machiavelli.

The former Secretary of State was and is heavily criticized for the support of individual authoritarian rulers such as Pinochet, or the more or less conscious acceptance of the victims in the Vietnam War. He is also accused of intrigue, unethical behaviour and his offensive foreign policy. Kissinger was characterized by manoeuvring and  playing individual parties against each other. Is that morally reprehensible? Quite possible. Nevertheless, all of these are instruments that diplomats – especially American (not only) diplomats – have used before and after him. The sole intensification on Henry Kissinger has no argumentative basis. Conversely, this does not mean, that his actions and the actions of many diplomats are morally justified. One could argue that if you want to prevent bigger evil, you have to accept smaller evils. That would probably be the argument by Henry Kissinger.

The architect of peace?

It is certain that no other US Secretary of State has ever been as polarizing as Henry Kissinger. While some openly described him as a war criminal, others classified him as the best Secretary of State of American history. Opinions still differ widely today: is the Nobel Prize winner an architect of peace or a cynical war criminal?

While negative criticism has increasingly come to the fore in recent years, one thing has to be said: Henry Kissinger has carried out his foreign policy functions, regardless of whether as a consultant or foreign minister, in a phase of the Cold War, arms race and escalation in the Middle East . As a proponent of the “balance of power” theory and strategy, and thanks to Henry Kissinger, the disarmament policy between the USA and the Soviet Union took place. He was also largely responsible for the “shuttled diplomacy” he shaped in the Middle East – i.e. mediating between hostile parties by constantly traveling between the countries. Especially in the Yom Kippur war, when the Arab states did not recognize Israel, he achieved a diplomatic masterpiece. The more or less stable relations between Jordan and Israel, as well as between Egypt and Israel, can be traced back to the mediation of Henry Kissinger.

A genius of diplomacy, who could unite opposites

Many years after Kissinger retired from foreign policy, he is still considered as a diplomatic compass and one of the leading experts. Kissinger often commented on the current conflicts of our time – such as the Ukraine crisis, where he advocated a more balanced Ukrainian foreign policy, as is the case of Finland. He rejected the American interference in the Yugoslav conflict as well as the designation of the Serbs and Croats as aggressors.

A genius of diplomacy and intrigue, a controversial personality who could unite opposites; on the one hand known for the offensive foreign policy of strength and at the same time responsible for the disarmament and détente policy. A power politician who worked closely with Western dictators and was a peace broker in the Middle East. Regardless of whether his accomplishments or “mistakes” predominate, he is considered one of the most influential people of the 20th century. The fascinating individual Henry Kissinger, a German-Jewish refugee child, not only managed to climb the educational Olympus in the United States, but also became a symbol of realpolitik and an icon of diplomacy.