Armenia & Israel: Two natural allies on opposite sides of the front 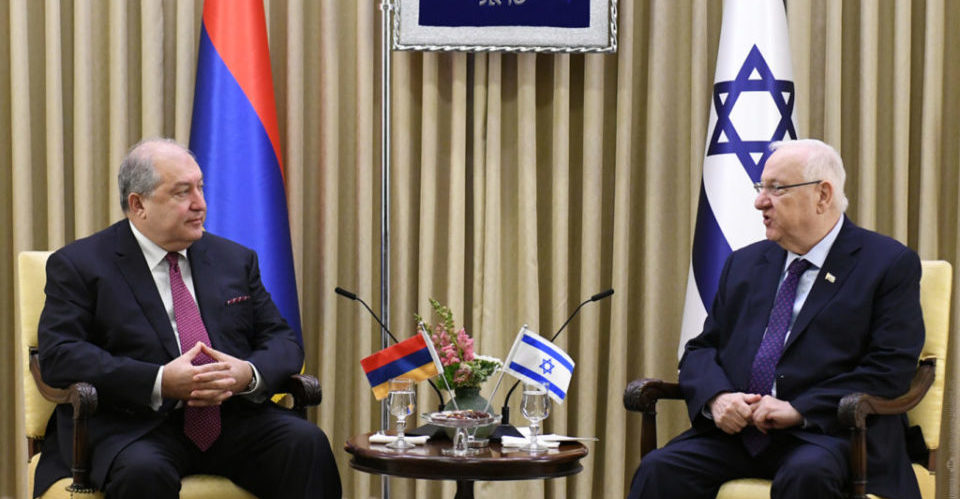 Armenia & Israel: Two natural allies on opposite sides of the fence

No other intergovernmental relationship could be as complex and ironic at the same time. Since Israel and Armenia are two nations with very similar histories, which could not be more different at the same time. The political situation of one country is the reflection of the other. What are the difficulties between Armenia and Israel and are they worth overcoming?

This comment is not a romanticizing of the relations, but it is a subjective contribution to the potential of Armenian-Israeli relations. And that for good reason. No other nations in the world have so many historical similarities as these two peoples. Adolf Hitler said – supporting his plan of the Holocaust: “Who still speaks of the Armenians today?

Both nations have fallen victim to one of the greatest genocides – initiated by rulers of the respective states to systematically kill people on the basis of religion and origin. The limitation of the Armenian-Israeli common ground to genocides is nevertheless too short. If one takes a look at the thousand-year-old history of both nations, it becomes clear above all why both nations have large diasporas and prejudices against Muslim states. For centuries, if not millennia, Armenians and Israelis were exposed to the invasions of mostly Muslim rulers. And even today they are still mostly surrounded by enemy countries. But more about that later. The reasons for the genocides? In both cases, they often began with prejudices and conspiracy theories stirred up in the respective states – i.e. the Ottoman Empire and the German Empire. Whereas in the Ottoman Empire one spoke of the wealthy Armenian class that would “steal” the money from the Turkish population, in the German case it was Jewish elites. Elite narratives and conspiracy theories are still an integral part of some countries today.

States which are very small in area and surrounded by mostly unpleasant neighbours. Both states are still in a struggle for survival.

And what about the society? As a result of historical development, both peoples, after many years of foreign occupation, now have states in their historical territories. States which are very small in area and surrounded by mostly unpleasant neighbours. Both states are still in a struggle for survival. The fact that in the ranking of the most militarized countries in the world, Israel takes first place and Armenia third, shows how dependent both states are on a strong military. There are also a number of parallels in terms of society and population: Both nations count only a few million people worldwide, about 16 million Jews and 12 million Armenians – most of them in the Diaspora. This is because both states rely on the – mostly influential – diasporas. It is not least for this reason that the Jewish and Armenian diasporas are considered the most influential in both the USA and Russia. Not so much because of their number, but primarily because of their organization. The exemplary adaptation to the culture of the respective host country and the exemplary integration is attributed to both nations among other things to their similar history.

A relationship of obstacles and new perspectives

Nevertheless, the natural allies face a number of foreign policy difficulties that put the two states on opposite sides of the fence. As mentioned before, both countries are accompanied by a constant struggle for existence. As a result, both states are forced to form strategies and alliances in order to survive in a hostile neighbourhood. Israel traditionally has more difficult relations with the Arab states, which is why Jerusalem is looking for other alliances in the region. The counterbalance against Arab states leads to Israel having better relations with Turkic-speaking countries, especially Azerbaijan and, to a lesser extent, Turkey. The situation on the Armenian side is exactly the opposite. Armenia is also in a struggle for existence and traditionally has poor relations with Turkic-speaking countries (with the exception of Uzbekistan), above all Azerbaijan, Turkey and to a lesser extent Kazakhstan. In order to develop a counterweight here, Armenia tends to maintain good or at least stable relations with some Arab states and Iran. This difficult situation stands in the way of truly friendly relations between two similar nations. While the Israeli side does not want to destroy its relations with the Turkic-speaking countries, Armenia’s relations with Arab states and Israeli archrival Iran are important.

The Armenian side is particularly concerned about the sale of arms to Azerbaijan and the hesitant policy regarding the recognition of the Armenian genocide. Above all, however, it should be mentioned that it is not the entire Israeli population and politics that are behind these developments, but only parts of them. After all, the majority of the Knesset was and is prepared to acknowledge the genocide – just like the incumbent Israeli President Reuven Rivlin, who not only once addressed the genocide. One thing in particular is problematic in Armenian-Israeli relations: the former Defense and Foreign Minister Avigdor Lieberman is one of the hardliners and is like parts of the Israeli economy considered pro-Azerbaijani.

Of all countries, Greece, Cyprus and Egypt could lead Israel into an anti-Turkish alliance, which would also undermine relations with Azerbaijan in the long term.

In a similar way as Armenia cannot sacrifice its relations with Iran, a minimum stability with Turkey and Azerbaijan is important for Israel. Nevertheless, there have been new developments and voices over the years: More and more voices within Israel describe the official non-recognition of the genocide as shameful. A recognition is realistic in the foreseeable future. Relations between Israel and Turkey vary greatly and collide particularly on the issue of Palestine. It is also worth mentioning that Israel has stable relations with Egypt and Jordan, with whom Armenia also traditionally has good relations. Another important aspect of Israeli-Turkish relations is the excellent relations between Israel, Greece and Cyprus. Of all countries, Greece, Cyprus and Egypt could lead Israel into an anti-Turkish alliance, which would also undermine relations with Azerbaijan in the long term. Historical in Armenian-Israeli relations is on the one hand the Armenian quarter in Jerusalem and the opening of an Armenian embassy in Israel. Armenia is engaged in a balancing act and does not want to disrupt relations with Iran.

Besides the similar history, similarities in state, society, political situation and diaspora there is a good political ground for Armenian-Israeli relationship improvement. Several Arab states, Greece, Cyprus and anti-Turkish anti-Expansionist alliance could be a stable fundament for further improvement. An Armenian-Israeli alliance is unrealistic in the short term, but it could work in the long term and would have the great advantage that both states and nations could understand the situation of each other – particularly from their own experience – and learn from each other.